After tragically breaking the trigger contacts in my ICS M4A1, my new one finally came in along with a MOSFET so that it won't break this time with a measly 9.6v 2000mah Ni-MH Intellect battery.  I'll be installing all of it into my gun so that those Madbull reviews will finally come online.  But first, let's see that replacement switch assembly.  It's made by Element and wired to the rear (I'll be using a battery pouch from now on). 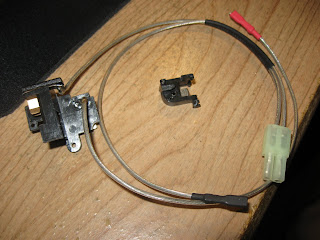 Well, there it is with large tamiya connectors (will be replaced with knockoff Deans) and silver plated wire.  Don't let that last part fool you - the wire is of an extremely thin gauge.  I'll expand on this later.  The contacts themselves are also a bit of a letdown.  While the moving one clearly has a silver plating/coating (or maybe it's just made out of silver), the other part is just copper which isn't as conductive as silver.  I picked up this switch assembly for $8.99 on Airsoft-Club.  Whatever, it should be fine with my little 9.6v battery.  I won't even think about running an 11.1v lipo on it before rewiring it.  Next up is the extreme-fire SW-S MOSFET. 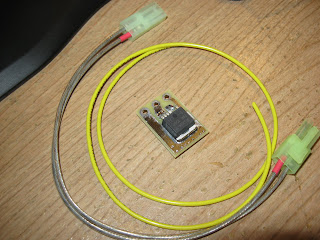 Ah, that's a Hexfet IRLS3034-7P.  The datasheet can be read here.  That yellow wire was also part of my order - it's a 20AWG wire which is recommended for its purpose (it will be connected to the trigger assembly).  That silver wire came with the Element switch assembly.  Now, is it just me or do they look as if they're the same gauge?  So my switch assembly came with 20AWG wiring... seriously most at least come with 18AWG if I'm not mistaken and most users switch to 16AWG.  Jeez... good thing this entire solution was only intended to be temporary until AWS products become available again.  I'll be going for an AWS Raptor with a Scorpion module.
Posted by boredgunner at 5:41 PM